“Happy Hour is a lush, elegiac film about an extremely difficult subject and Ms. Claggett handles it masterfully.”

“Happy Hour has a mission — to start conversations that can save children — but it’s also a powerful drama. A wider audience awaits.”

“Poignant and powerful filmmaking on a tough subject. Happy Hour beautifully raises the issue and reality of child sexual abuse while giving voice to many who’ve been silent too long.” 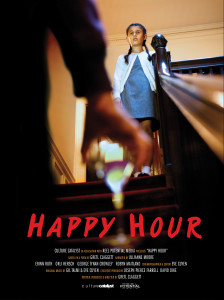 Logline
When a woman meets her boyfriend for a romantic night out, a martini triggers childhood memories that threaten her ability to trust and love.

Short Synopsis
When a woman meets her boyfriend for a romantic night out, a martini triggers childhood memories of sexual abuse by a family friend. She boldly faces the girl she was and the secret that’s threatened her ability to trust and love.

— Based on a poem, narrated by Julianne Moore.

Click the + to view the answers to each question.

How did you approach adapting the poem for film and why is there so little dialogue?
The poem quickly transports readers from an ordinary present moment to an unexpected past offense, breaking silence and speaking the unspeakable. I wanted the screenplay to work in much the same way, so I created silence by having characters talk only if absolutely necessary. Each line of dialogue contains one of the poem’s keywords or phrases; they act as subconscious triggers, driving the film to its climax when the poem — the memory of what happened — is spoken in its entirety.
Does the child playing the Girl understand what's portrayed in the film? How did you talk to her about such a tough, taboo subject?
We were incredibly blessed to find Orli Hersch. She was 11 years old at the time. After her first on-camera audition, she peered up at me: “Gretl, may I ask you a question?” “Sure,” I replied. She softly inquired, “How did it stop?” That’s when cinematographer Eve Cuyen almost dropped her camera. I took a breath, then answered Orli’s question directly and honestly — sensing we’d found our “Girl.” This was confirmed at callbacks when, during one of the improvisations, she brought me to tears and George Tynan Crowley — already cast as the Pedophile “Uncle” — “almost fell out of his chair” (his words).

Orli is a gifted actress, wise beyond her years. Even so, my priority was to keep the scenes and set impeccably safe for her. Before shooting, we had a number of discussions and rehearsals. I showed Orli photos of myself as a girl, answering each of her questions, following her lead. Nothing was off limits. Through the process, we developed a code. For instance, whenever I needed her to express the look and feeling of dissociation, I’d ask her to become an American Girl doll: body limp, eyes vacant.

What influenced your casting and developing the role of the Pedophile 'Uncle'?
“Never cast a son-of-a-bitch as a son-of-a-bitch,” one of my favorite directors used to say. So I followed his advice and asked George Tynan Crowley to play the Pedophile “Uncle.” George is a versatile, courageous actor. More importantly, though, he has a big heart, gentle spirit and playful sense of humor — and I knew I could trust him to be sensitive and appropriate when working with a child on such intense material.

I wanted the “Uncle” in a short span of screen time to come across as a complex human being, not just a villain or “monster.” He commits heinous crimes behind closed doors, but in public — as is the case with many perpetrators — he’s charming: a good husband and a generous, upstanding citizen in his tight-knit, middle class community.

At one point early in the rehearsal process, George ran into Orli and her mother, Marni, on the street. He shared that I’d put him in touch with a few psychologists to do research; that he was watching documentaries and reading a lot on the subject matter, nervous about playing this kind of man — could he pull it off? On he went until Orli interrupted him: “All that’s fine, George. But our job is to fulfill Gretl’s vision so that people understand how these terrible things happen.” As he later told me, “From the mouths of babes…”

While George and I had many conversations about my real “Uncle,” I encouraged us both — and all the actors — to free ourselves from the constraints of biography in order to make the most powerful choices possible for the world of the film.

How much of your true story is in this film?
The film is based on the poem and true events, but it’s not a documentary or docudrama. It’s a narrative short, informed and infused in numerous ways by my experiences. Here are a few examples: 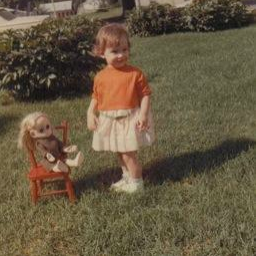 What's the significance of the 'Aunt's' silver-dollar necklace?
Grooming is a process by which a perpetrator lures a young victim into a sexual relationship and then maintains that relationship in secrecy.

The “Uncle” grooms the Girl in the film by slipping her silver dollars — one of the ways my “Uncle” groomed me in real life. But to get away with these crimes, perpetrators don’t just groom their young victims; they also groom the parents, friends and their own spouses.

There are a few meanings behind the “Aunt’s” silver-dollar necklace. It symbolizes how her husband, the “Uncle,” has groomed her into silence and complicity. She knows what he’s doing but chooses not to stop him because it would damage her lifestyle, friendships and community status. It also points to the fact that she, too, was victimized as a child and hasn’t yet healed or broken the cycle of abuse.

Why don't the parents and other adults at the party see what's happening?
That’s a common question: Why don’t people notice what seems obvious in hindsight? More than 95% of sexual abuse happens at the hands of a family member, friend or acquaintance — someone the child knows, trusts and loves. Because the nature of the betrayal is so vast and the crime so devastating, most of us never want to contemplate that it could be happening in our community, let alone within our circle of friends or family. And that’s what perpetrators count on.

The “Aunt” knows and does nothing; she’s consciously complicit. The parents and friends at the party sense something’s amiss, but they’re either too distracted by life’s many midlife obligations, blame their discomfort on some other problem or are too afraid to trust their gut — what if they’re wrong? And because they’re fueled with alcohol, their instincts are off; so they don’t see what they see or know what they know. This makes them unconsciously complicit.

1 in 4 girls and 1 in 6 boys are sexually abused before turning 18. This translates into roughly 40 million adult survivors in the US alone. Those statistics are staggering, but what can I do to make a difference?
Site Design WebsitesInWP.com